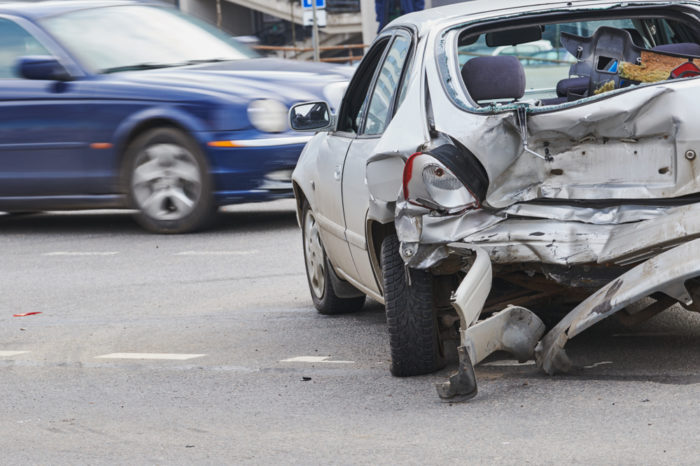 What is Contributory and Comparative Negligence

But before we dive into such convoluted – yet extremely important – legal concepts as these, let’s start with a story: the story of the guy who had a student bounce off of his fender and crack her skull open on the curb.

It was dark. It was rainy. The guy had just finished teaching a class. He was driving well below the speed limit while traversing campus, with a police officer tailing him for presumably no reason, when suddenly it happened: a loud thump. The driver got out to examine the situation and realized that he had hit a pedestrian. She had been talking on her phone and inadvertently stepped right out into traffic. Her books were splayed across the sidewalk. She was likewise, laid out, knocked unconscious due to the impact with the curb. And her phone lay on the ground, displaying her ongoing group text.

The police officer pulled up right behind them, turned on his lights, and called for an ambulance. He told the driver that he had witnessed the entire thing and that the student had simply stepped out into traffic in front of a moving vehicle.

Now, there’s an old saying that when it comes to accidents that are auto versus pedestrian: the auto is always at fault because they are supposed to drive defensively and anticipate the moves of pedestrians. Of course, that saying isn’t strictly or legally true, but depending on how good your lawyer is, it might just be practically true. Plus, juries and judges are more inclined to feel sympathetic for a defenseless pedestrian than a driver with insurance.

But let’s look at the law here: who do you think is at fault? Was it the driver, who arguably should have anticipated that a student on her phone next to the roadway might step out – perhaps he should have driven even more slowly and cautiously? Or was it the student, who carelessly slipped onto the motorway while texting, oblivious to the ongoing rainstorm, darkness of night, and oncoming cars?

Draconian rule: contributory negligence means she doesn’t get a dime

In many states, such as Virginia, there is a rule for apportioning fault between parties in a lawsuit called “contributory negligence.“ To put it as simply as possible, this concept says that if you contributed to the accident through your own carelessness or fault, then you cannot recover from the other party – at all. This is as true if you are only a little bit at fault as it is true if you are entirely at fault.

To return to our example story, the pedestrian was at least a little at fault here, right? At a minimum, she should not have walked into a roadway while texting, without checking for oncoming traffic. Even if you side with her entirely, you would have to admit that she is at least 1% at fault. And in contributory negligence states, that means she cannot recover a single penny.

All those hospital bills, the cost of replacing her now broken smartphone, even the cost of her new textbooks, all fall to her.

But, to make things even more complicated: there are two types of comparative fault theories. In ordinary comparative fault states, it is straight percentages: the judge or jury is asked to assign a number – a percent of fault — and then take that same percentage and apply it to the damages. If it costs our poor accident victim $10,000 to get her life back on track, and the judge decides that she is 50% at fault, she is only going to get 50% of those damages, or $5000. This sounds like the most fair solution, since it apportions damages exactly according to levels of fault. But, it also encourages litigation: a party who is 99% at fault can still fight for her 1% of damages, which means more frivolous litigation and settlement demands.

In addition to the above rules for balancing fault against damages, there is a third rule that tries to chart a middle course between our strict draconian contributory negligence states like Virginia (that would leave a person barely one percent at fault without a remedy and the arguably too-lenient comparative fault states that can encourage a person who is almost entirely at fault to proceed with litigation in hopes of a quick settlement: the modified comparative fault rule.

In modified states, the judge or jury will still compare the fault of the parties and assign percentages, but if you are at least 50% at fault, you cannot recover. So, if a jury felt that our wordsmith pedestrian was 75% at fault for this accident and the driver was 25% at fault, our tripping texter would not recover a dime. However, if they were convinced that she was only 49.9% at fault, she would recover 50.1% of her damages.

Regardless of the Rule, You Need Rigorous Representation

You can’t control which of the above rules apply to your accident, short of moving to another state. And you can’t control whether or not you are in a car accident, unless you stay home and live far away from roads. Whether you are a pedestrian struck by a car or a driver that was involved in a collision, it is important that you find an experienced attorney who can help you work with the rules in your state to ensure that you aren’t left without a remedy. Connect with one of our attorneys today to give yourself the best chance of recovery.

Motor Vehicle Accident Liability When you suffer an injury in an auto accident caused by someone else, you have a legal right to seek compensation

Proving Liability in a Traffic Accident

Proving Liability in a Traffic Accident Liability for traffic accidents arises from negligence law. This means that not every accident will result in liability. Sometimes,

What is the Graves Amendment?